Herat is the most ancient province of Afghanistan that has root of Ariaies and has important role in culture, economy and trade of this country and perspective of its position is the best place for the civilization of east and west. In other side most of great saints has been buried in this province so Heart according its constructions and history mentioned by the eight moods in relics and books. In the past in prophet Mosa (PBUH) term centuries Shamreen castle was billed by a woman who named Shamera and people has been lived there for centuries. After increasing of population in this castle during Kingdom of Khazarnosh son of Sam Nariman the castle build by the name of (Quhndoz or Kahndogh) in south of Shamreen castle and some of people carried there. During kingdom of Arghaghosh in south of Quhndoz Shahr Band castle has been build in this project about 16000 workers was working each day, that during 8 years the walls of castle build and it toke about four years that walls became dry after 8 years the walls became completed and cause of that whom the king ware Christian so, at each tower of castle has built a salib cross and had 4 doors that every one of that's has named by (Firozbad, Sara, Khosh and Quhndoz) doors. Over times these triple neighbor hoods become merged and Herat was created and Herat in Avista book named Hariwa, Haree and Herat but people say that Herat was the name of Zahak's girl. 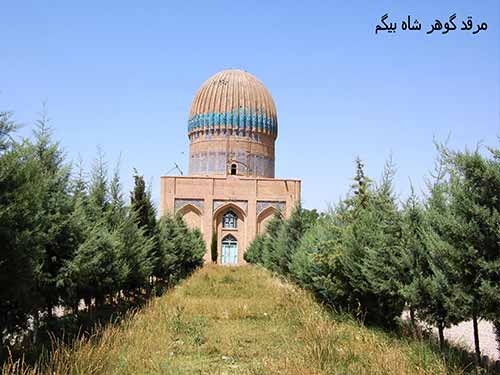 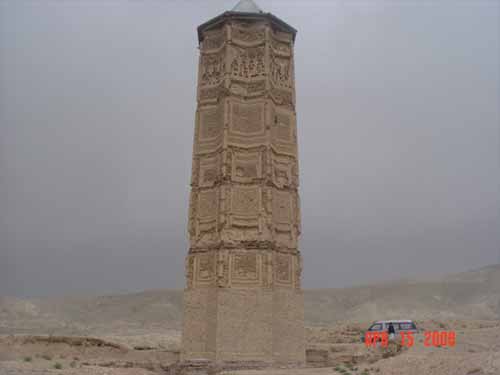 Shrine of Prince Abull Qasem located in eastern of Abdullah Ben Mawia at the center of city. It has a beautiful dome with beautiful tiling and scripation holy Quran's revelations have been added to its beauties that at all it made in Khorasany architecture shapes.

Quhndoz place that one time was located at north of Herat but now is located near to center of city near to Malik squire in pas called as cementry of Sadatds'.

Tomb of Abdullah son of Mawia Ben Jafar Tyariki is greatest shrine of in this place that this building has been made by Shamsullden Mohamad Kurt that from 706 – 736.

Shash Amam is located in south of Herat which in this place are sex tombs belongs to grandsons of Amam Sajad (PBUH) and this place is the shrine of Herat people.

The main building of this mosque is belongs to before history of Islam which on that time was the temple of Ariaies but after that Islam came to Afghanistan this place has been changed to comprehensive mosque of Herat.

The person who worked in painting and artist parts of this mosque during Mohamad Zaher Shah's kingdom in 1322 was Haji Molah Abdullah Herawi, Molah Ali Atar Herawi and Fakiri Saljoqi that from starting up to end of constructing of project have been worked.

The biggest and ancient pot of Herat's mosque

The metal pot with 1 ˝ meter diameters and two meter depth has located in Herat mosque that peoples in Eid and Joma days ware drinking water from that. This pot has been made by Qalandar Faqai Teacher in period of Sultan Ghiasulldin Ghori Peer Ali son of Sultan Mazulldin lost king of All Kurt in 776.

Once of remaining relics are 9 minarets in corner of Herat Street that some of them was destroyed by England army in 1304 and now from nein of that minarets 6 of those minarets with a dome belong to Gawhar Shad Agha's dome are exist on there.

Some old men has trust that these minarets has been build by revelation of stars from sky by the name of seven brothers.

Alisher Navai was the littered and writer minister of Sharukh that buried in Herat. He was a national poet cause before who poem in Dari language he had been poem to Uzbekian and Turkey languages. Ali Sher Navai was an important person and his dome his tomb also is an ancient relic in Afghanistan.

Gawhar Shad's tome which has a school and mosque was building in 1417 in side of city that has beautiful columns with damask blue tiling and a nice dome that all of them calligraphy with revelation of Holy Quran and is one of best of Islam around the world.

In 1937 Bairon found it one of best painting and construction of human to keep his relation with his almighty Allah. Gawhar Shad after making of 300 building in Iran Afghanistan and south Asia has been killed and very simple has been wrote on his stone tablet Bulqis of the time and most parts of his dome has been destroyed by Englands in 1885.

This tomb has belonged to son of Muslim Ben Ziad Ben Amam Husain (PBUH) and it has written in his tombs stone too but it is popular to tomb of Sultan Abdull Wahed Aqa that was building at first in 320 when Shaikh Abu Nasir saw prophet Mohamad (PBUH) in his dream.

During epoch of Sultan Husain Baiaqra and Habibullah Khan in 1325 this tomb rebuilds and a stone tablet has been hung on the tomb.

Khwaja Abdullah Ansar has been burn in 326 and was died in Gozargah of Herat province near to shrine of Prince Abull Qasem that now this place is very green and beautiful. In here to other sons of Khwaja Abdullah Ansar by the names of Shaikh Asmail and Shaikhull Islam Abdull Ahad also buried.

Temor Lang was one of Mogols' nations and resident of Mawarull Naher that in 1381.ad. He has been attacked to Afghanistan and Afghanistan became under his supervision so made Samarqand his capital. After that he died his son Shahrokh and his wife Gawhar Shad Agha carried capital of Temorie's Empire in 1401.ad to Herat so cause of that Herat city was developed very much. More sons of Shahrokh become king of Temorie's Empire that their tombs are in shrine of Khwaja Abdullah Ansar.

In Gozargah place are some Changiz kings that on their tomes are some white marble stones with beauty lithographs that these stones according to their artistically and history are the best wealth to Afghanistan.

Abdull Rahman Jami was one of Dari Language poet that buried in Herat and he was Astrologist too that Jami's calendar has been printed in Oxford university in 1665.ad and the most popular his relic is Awrank book. He had been burn in 817 in Khajrad district of Jam and was died in 897 in Herat and buried at side of Sadulldin Kashughri shrine and on his tomb constructed a stilted building.

Amam Fakhr Razi that his name is Mohammad Ben Omar Ben Husain Ben Ali Razi and his gilder was Shafi is one litterateur of Islam. He has been interred to Herat during epoch of Malik Ghiasulldin in 580 and Sultan made library at side of comprehension mosque that on there he thought and search. Amam Fakhr Razi was died in 606 in Herat city and buried on there that on his tomb made a stilted building.

Mirza Kashfi was great litterateur of his epoch that Husaini Explanation Book and Rawzatull Shohada Book are the authorships of Mirza Kashfi that his tomb located in Entrance Street of Herat in front of BaBa Jee place.

Mazarihi Ben Omar Sajestani Khwaja Ghaltan is one Gnostics of Herat that is attraction of all people and tourists. People whom were coming to Khwaja Ghaltan pilgrimage believed that if their motive been accepted, while they are fidgeting once after that fidgeting by themselves.

Akhtiarulldin castle is one of best sightseeing place in Herat that has located in center of city. This castle with high walls and towers is the greatest constructs of Temories period that in 100 years ago was the fort of England army that is register in (UNICCO).

Haft Qalam Stone is one of ancient relic that 7 years a sculptor has been worked on this stone and it supposed to be put on tomb of Sultan Husain Baiaqra but one of his sons who was very closed to him and has been died before Sultan Husain he put that on his tomb the stone. 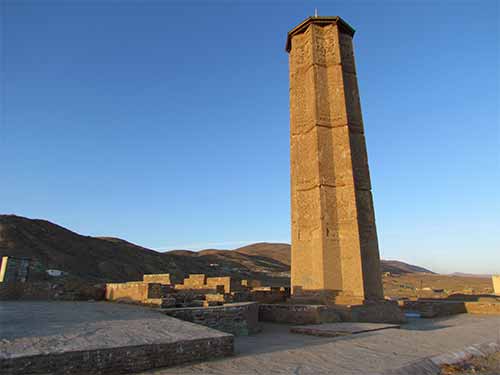 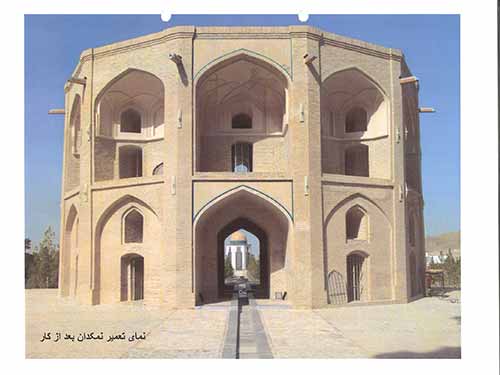 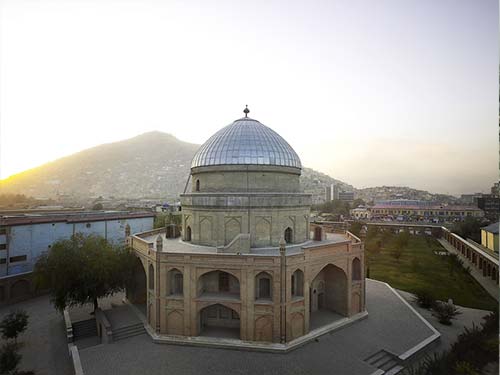 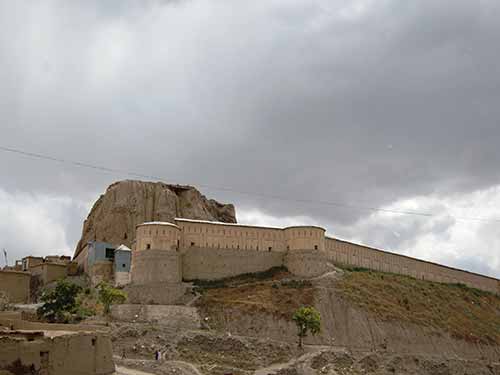